Moslem community in Myanmar is quite sizeable that almost every town got at least one mosque to cater for Moslem community of which I reckon almost 10-20% of the entire population of Myanmar. They are rather self-sufficient community with respect to relationship to Allah (“hablumminannas“). Internally, their house of worship (masjids) are well decorated, with carpets and most with air conditioners or at least ceiling fans. Externally you may not recognize that it is a masjid as the small entrance blended well with old shophouse, but the entrance could lead to a modest prayers hall. This is true for masjids in downtown area where space is a limitation. Some masjids outside the downtown may have some exception. Masjids also serve as a community center and a place for learning Islam for young and adult alike. Quranic and fardhu ain classes are common sights in most masjids. Jemaah Tabligh is the most active dakwah group here. There are many Islamic organizations in Myanmar but most are lesser known, apart from Ulama Council (Majlis Ulama). Ulama Council is the body which issues and perhaps monitors halal certification for foodstuff manufacturers in Myanmar.

Myanmar is a deep Buddhist country, so other religions take backseat.  You could see mosques in every towns and cities but most are in dire state. So are churches. Operating expenses for mosques come mainly from public donation and wealthy moslem businessmen. Despite assurance of freedom of worship, discrimination by religion prevails.

Here are some collection of mosques in Yangon, MYANMAR that I have been during my short assignment in Yangon. I will update this post from time to time insyallah. Mosque (or masjid in Arabic or Malay) is called pelly in Myanmar.  If you say “Petchampek pelly thuwa may” to a local taxi driver, it means “let’s go to Petchampek Mosque”. Moslems are called as kalla by non-moslems in Myanmar, the word itself carries a derogatory meaning, so I was informed. 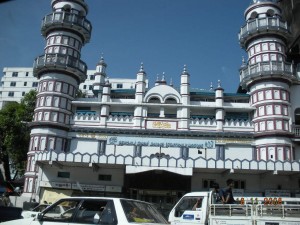 1. Masjid Sunni Bengali — probably the most popular among tourists and business travellers  as it is located in the heart of the city, along Sule Pagoda Road. It is 5-min walk from Traders Hotel and about 10-15 min walk from Bogyoke Market (Scott Market). Friday prayers time is the busiest. Prayers hall is air-conditioned. Sule Pagoda is just right in front of it. Halal restaurants are aplenty around the mosque. Just ask locals. UN Representative Mr Ibrahim Gambari offered prayers here when he was in Yangon in 2008 negotiating the release of Daw Aung San Su Kyi with the Myanmar military government. 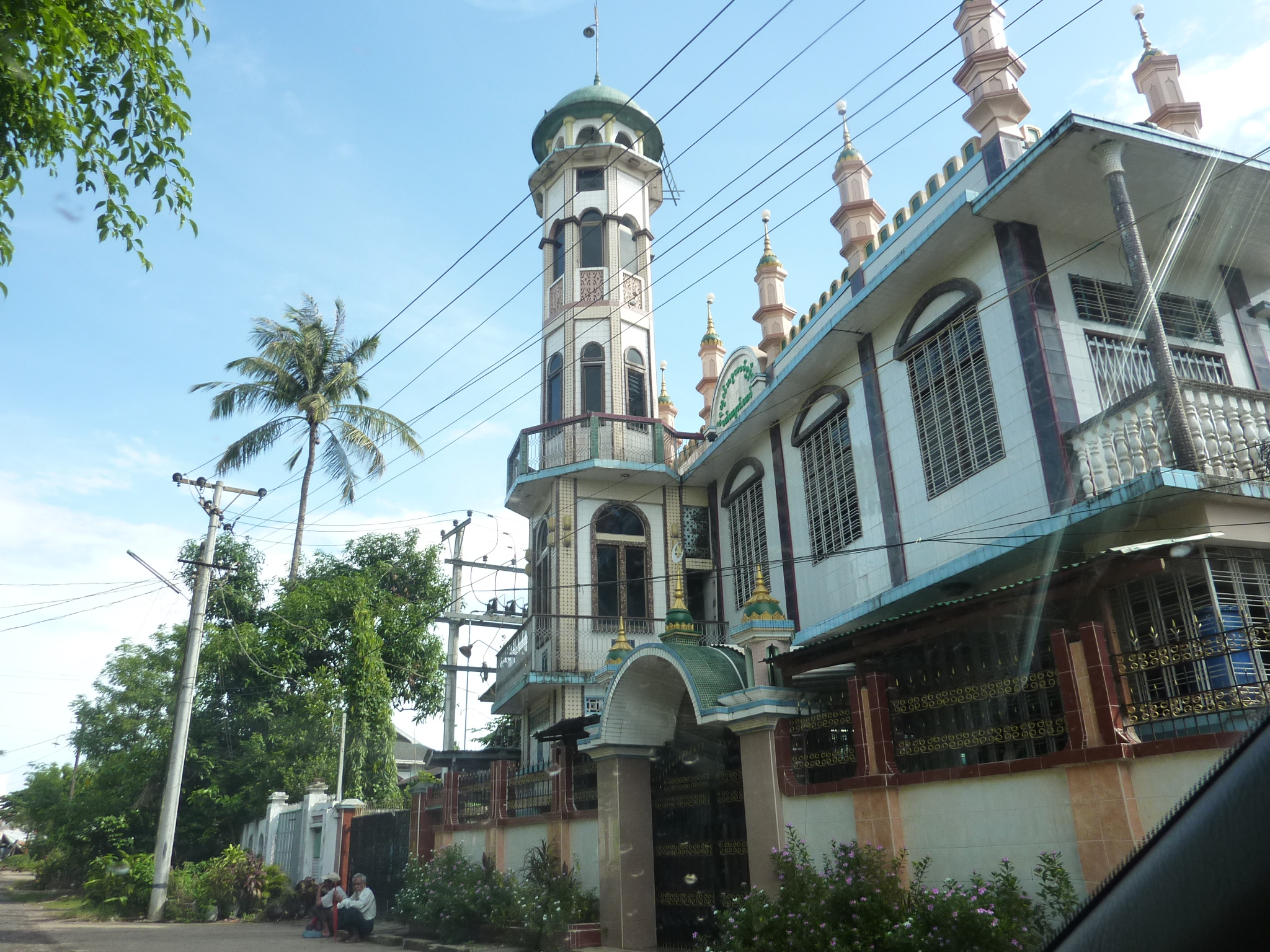 2. Masjid Kam Bek, Yankin Township, Yangon — located off main road in Yankin township in a quiet neighborhood among big houses with high fencing. Down the same road, there is a Catholic church. This mosque is about 20 min drive from downtown. Take Kabaye Pagoda Road toward the airport and turn right after Sedona Hotel. 3. Masjid Chulia Dargah, Yangon — located right in front of Bogyoke Market (Scott Market), along Aung San Road. For heavy shoppers if you run out of time, just stop by here (males only). Hotel Central, Hotel Traders and Malaysian Airlines Office is are all next to this mosque. Dargah means a tomb for a pious man where people come to pay respect. Don’t know who he was. May God bless his soul. Nice decoration inside — main prayers hall is air-conditioned. 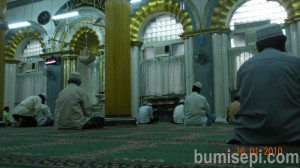 Inside view of Masjid Sunni Moja in Yangon

4. Masjid Sunni Moja, Yangon — located in the Yangon downtown area, near Anawhartha Road.  Founded by a group of moslems from northern India who came to Myanmar either as traders or soldiers during British occupation in 1930s.  All Sunnis in Yangon are mainly Hanafi sect followers. They all observed more or less the same prayers time (azan and solat time). 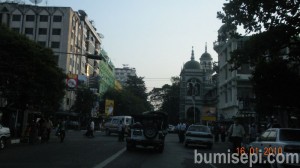 6. Masjid Petchampek, Yangon — this masjid is located along Upper Pansodan Road, near Aung San Stadium and the main railway station. A big moslem community in the township of Mingalar Taung Nyunt is next to it. Dr Mahathir Mohamed, ex- Malaysian Prime Minister was said to have offered solat Jumaat here during his visit to Myanmar some times ago.  The masjid was itself a historical site in a way. It was a target site for militant bombing in late 1990, and as result half of the building was destroyed, but never repaired since then. That’s how the name was derived —petchem means half and pek means pieces.

Inarguably, the mosque is the most international as it is the markaz (center) for the Tabligh Jemaat movement in Yangon.  This is a peaceful missionary movement who travels around the world from one place to another to spread the message of Islam to the entire humanity, with priority to moslem brothers, reminding them to return to the greatness of life hereafter. This movement makes mosques as center for their activities.  So there are bustling activities inside and outside the mosque every day. There is a halal moslem restaurant nearby. Multipurpose hall next to the main entrance to Masjid Jamek Cholia 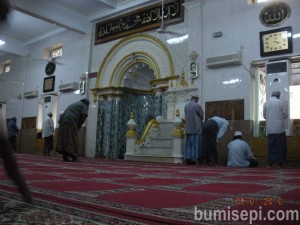 7. Masjid Jamek Cholia, Yangon — located  on narrow Bo Sun Pat Street in the downtown area. Very close Masjid Sunni Bengali (see above). The masjid has a mutipurpose hall for rent to muslims to conduct their activities including wedding, meeting and training. Many stalls selling halal food and drink at the entrance — very lively everyday after solat Asar as jemaah enjoy evening air with a sip of lempe-ye (tea with milk) waiting for Maghrib prayers. 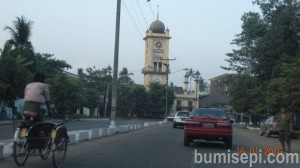 Minaret of a masjid near Tamwe. 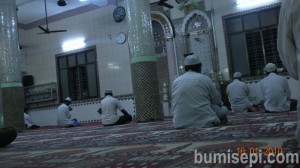 Inside Masjid Jamek Tamwe in Yangon 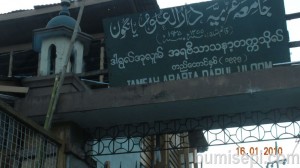 8. Masjid Jamek Tamwe, Yangon — located in Tamwe Township, about 15 min drive from downtown area. Tamwe is home to many moslems in Yangon. They are 3 masjids — may be more — in the Tamwe township. Masjid Jamek Tamwe is located near the famous Tamwe junction. The masjid is considered big if you add a madrasah tahfeez, Quranic classes and the old moslem cemetery behind the masjid.  A renowned moslem scholar from Makkah was said to have been died and buried here. 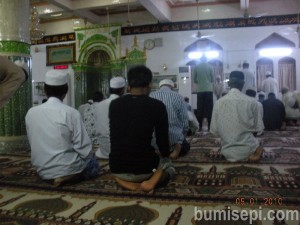 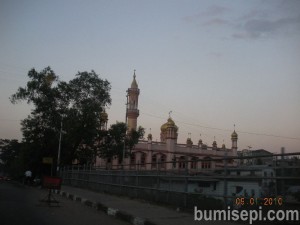 9. Masjid Jamek Bengali, Yangon — No doubt that this is one of the big masjids with a distinctive mosque design, looking from outside. It is located along the road leading all the way to the downtown area. The masjid is surrounded by moslems living in the apartments. Only 10 min drive from the downtown. 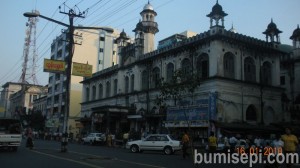 10. Masjid Syiah, Yangon — located at the busy road in the downtown area.  Never been there, so do not know how they pray. It is actually a Syiah — a sect of Islam considered deviationist by maintream Islam — community center. 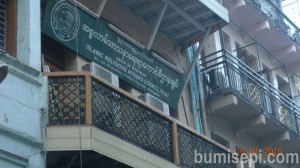 11. Islamic Council HQ, Yangon — located along Bo Sun Pat Street in downtown Yangon. I don’t have any info on this Islamic body — its organization structure, their objectives and the members. Just came across the office and snapped the photo.

12. Masjid Ranauk, Yangon — located in the moslem area of Myagone in the township of Mingalar Taung Nyunt.  Green marble slabs make up the facade of the mosque. Some portion of the mosque was under construction during one Asar prayer in June 2010, when I was there. Main prayer hall is fully air-conditioned.

13.  Masjid at 8th Mile (Pyay Road), Yangon — located conveniently on Pyay Road (old name= Prome Road) at Kabaye Pagoda Road, one of the busiest intersection in Yangon, between Yangon Airport and downtown. This is a small masjid hidden behind the row of old shop houses.  A famous shopping center known as Junction 8 is just across the road. This is a site for bomb blast by separatist group (as claimed by the Government) a couple years back.  Yangon Hotel is only one -min walk.  Downtown  area is about 30-minute drive away from here.

14. Masjid Kokhine, Kabaye Pagoda Road, Yangon — the smallest among all mentioned above. But I must mention this mosque as I frequented this mosque the most during my time in Yangon for a very simple reason — nearest to my office and my apartment. Located along busy Kabaye Pagoda Road, this mosque could easily missed if you are in a speedy car. We also called it Toyota mosque, as a Toyota service center is just next to it.  The trustee is Brother Ahmad, whose late grandfather Mohammed Jewa owned and waqaf (donated) this land for mosque construction. He and his 10 relatives stayed behind the mosque.  Fully air-conditioned but only turned on during Friday prayers or hot summer days, to save electricity.

A wise man from Yangon

He waited for me at the door when he saw my car pulled over to empty parking space. An old man with frail frame put a genuine smile on his face to welcome a foreign visitor to his apartment near Tamwe township in Yangon, Myanmar. The wife was equally excited to receive a simple me, […]

And below are some reasons for me to return to Yangon in Myanmar. What a beautiful country it is! I have been there and some memories keep lingering on.  1. Gemstones. I don’t like this but my wife does. She managed to persuade me into it. Finally she bought 3 silver rings (with sapphire, ruby and […]