This is Taman Seroja foodcourt. Located within walking distant to city center attractions such as Hotel Mega, Hotel Imperial, Miri handicraft center, Bintang Megamall, waterfront, it is an open-air eateries with stalls selling local foods from fried rice, nasi lalapan, nasi campur, noodles, grilled fish, and even soup and soto.  Price are reasonable. Which stall is good? You have to try it for yourself. Soup seems ok, the right-most stall. Sup tulang, as the name implies, is literally sup tulang. Soto comes with rice cubes. A bit overpriced. My friend Julayhi said fried rice at next stall is good. Never tried before.
If you are into nasi lalapan, do not come here. Instead go to its founder. Muara Restaurant at Jln North Yu Seng.

Miri in Sarawak is a beautiful city. On 5 July 2013, I returned to the city. I found this billboard greeting travellers to the city, while exiting Miri Airport (Airport code MYY).  It was a good feeling to be welcomed in the foreign place. Foreign in the sense that you must go thru immigration checkpoint once you landed in the Miri airport, eventhough you are Malaysian from KL or from other states within Malaysia.

I sure missed few things about Miri, one of them is nasi lalapan, others being road condition going out of city and its nearness to Brunei, which allows you to travel to the small wealthy kingdom with ease. I must say if there is two journeys I must undertake in Borneo, it would be Kuching-Pontianak and Sibu-Kapit.  Well, I will return this coming Malaysia Day to Miri.

By the way, one simple quiz to test your Malaysia knowledge; how many hours it takes for a bus ride from Sibu to Kapit? 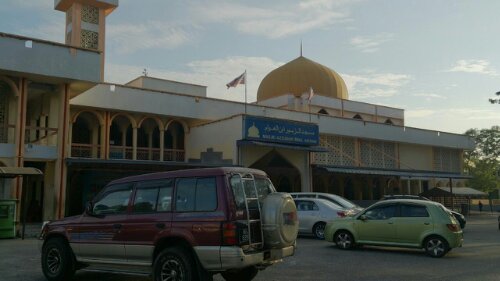