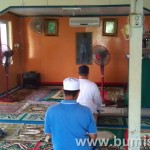 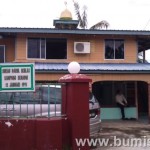 >>> Posted from mobile device via WordPress for Android This project took place mid February, a week after cny. Full story and pixs are under way.

>>> Posted from mobile device via WordPress for Android Satisfy your tastebud with the most popular everyday Malaysian dishes — which is no other than nasi lemak.  Nasi lemak is rice cooked in santan (coconut milk) and served together with sambal (spicy gravy) and other condiments and best savored in its most spartan form — traditionally wrapped in banana leave in pyramid shape. (See photo below — the leftmost menu item). Nasi lemak can be found anywhere —  in a posh hotel, by roadside stalls or even on MH and AK flights. If you are at LCCT and about to board a flight and still have 10 minutes to spare, try the stall below. For RM6.90 you get a nasi lemak complete with one half of hard boiled egg, anchovies, 2-3 slices of cucumber and a hot sambal (gravy). The package comes with a cup of kopi-o (black coffee). The stall is located right in front of departure gate P8 and P9. You can enjoy it in complete view of your departure gate, so that you will not miss the fight!

Seasoned travelers know it and will try as much as possible to avoid arriving at a destination after midnight, more so if it is a new city where they have never been before. Trains or metros or even public buses in most cities normally stop operating after midnight. The only option available is public taxis who prone to take advantage of the desperate travelers  or in some cities are authorized to charge extra. In Kuala Lumpur for instance taxi drivers are licensed to charge 50% extra from rate displayed on meter if they drive you from 12 midnight to 6 am. But unscrupulous ones will press even higher. I learnt some hard lesson when arriving in Kuala Lumpur LCCT from Miri well past midnight, to be exact 12:45am. LCCT which stands for Low Cost Carrier Terminal is the home for Air Asia fleets in Kuala Lumpur. Unlike KLIA, there is no direct train service from LCCT to KL city center.

So what do you do  if you cannot afford to arrive early at LCCT?

One good thing about LCCT is its bus services. Of many, Skybus and Aerobus provide bus shuttle LCCT-KL Sentral-LCCT almost around the clock, on hourly basis. The fare are very reasonable. Only RM8 (for Aerobus) and RM9 for Skybus, one way trip. This is considered peanut for budget travellers compared to a whopping RM70 – RM80 charged by budget taxi for the same route. The buses are new, clean and air-conditioned. One way journey takes about 0ne hour (midnight trip).  Tickets can be purchased at the ticket counters at baggage reclaim area (domestic arrival) or just before boarding the bus. For Skybus, you can buy the bus ticket in any Air Asia flights or when booking flight on line.

You can see the buses after leaving the arrival hall and turning left. Aerobus is located at platform 2 and Skybus at platform 1.  The bus will take you to KL Sentral, and probably you need to wait at KL Sentral until 6 am, when the first train starts operating for the day. But if money is no problem to you, taxis are available at KL Sentral to take you to your destination at the normal rate, plus midnight charges, plus other charges.

Likewise, if you have to catch plane at 6am or earlier from LCCT, you may catch the same bus from KL Sentral to LCCT. The KL Sentral bus terminal is located at the lower ground floor of KL Sentral (at the nearest end to Jalan Brickfield, but at the furthest end from Hilton and Le Meridien hotels). The bus going to KL International Airport (KLIA) is also parked there. Remember KLIA and LCCT are two different airports. KLIA is home for Malaysia Airlines and LCCT is home to budget airline AirAsia. They are  some distant apart, not walkable.