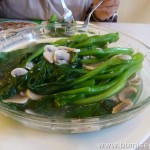 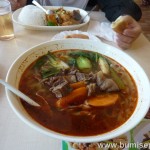 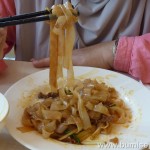 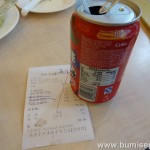 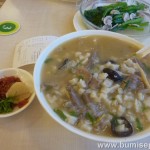 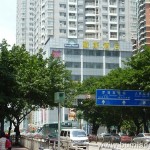 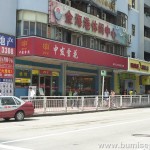 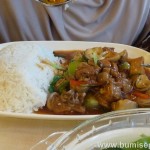 Bagaimana untuk sampai ke sini? / How to get here?

Access to this mosque is quite tricky as the entrance is located at the edge of crowded intersections.  The mosque is located inside the small park (there was a construction work at the entrance to the park during my visit). For adventurous, you can take Guangzhou metro and stop at Yuexiu station.  In the metro underpass, exit toward Li Hua Hu park (opposite side of Yuexiu Park).  NOTE: There are many parks around this area. When you come to street level, turn right and walk ahead along North Jiefing Road (not toward China Hotel). You will see a small park at your left, and of course the famous Yuexiu Park to your right across the street. Keep on walking and the road will curve to the left.  The entrance to this mosque is to your left at the curve.  If you walk more than 15 minutes from the Yuexiu metro station and still cannot find the mosque, you are lost already.   For conventional people, you can take taxi to this place, but make sure the address of the mosque is written in Chinese. Ask your hotel’s concierge to do this. Some taxi drivers will just dump you in front of the entrance to Yuexiu Park and tell you that the mosque is just across the road, pointing to the direction of the small park. (Thats what happened to me. In this case you must cross the road via metro underpass.) A well which never dries at the Abi Waqas Mosque in Guangzhou, CHINA Entrance from the small park in the front of Abi Waqas mosque in Guangzhou, CHINA Ancient tombs of sahabat (sages) in the Abi Waqas mosgue in Guangzhou, CHINA A small building housing the tomb of Abu Waqas in Guangzhou, CHINA Tomb of Saad Abi Waqas (may Allah be pleased with him) in Guangzhou, CHINA Bagaimana untuk sampai ke sini? /How to get here?

Taxi is the best way to reach this place. Guangta Lu is a narrow alley away from main road. The main road is Zhongshan Road No.6 and Jiefang Road.  For the adventurous you can take super-efficient Guangzhou Metro at stop at Ximenkou station. From there you walk  along  Hufu street with cool  leafy trees and everyday shops and everyday people. Turn right into Guangta Lu and this mosque is at No 56 Guangta Lu. There is a halal restaurant and halal grocery store in front of the mosque. Locals / taxi drivers may not know the word mosque, but they know Muslim temple. Facade from the main road. This masjid is located at 56, Guangta-Lu (Guangta Rd), Guangzhou, CHINA How to reach the mosque: One way is take a metro and get off at Ximenkou station An old lighthouse is a historical feature of this mosque Inside view of the Huai-sheng mosque in Guangzhou, CHINA Main building (prayers hall) in the compound of Huai-sheng mosque in Guangzhou, CHINA