First Ramadhan this year (1430Hijrah=2009M) found me in Kuala Lumpur after having attended some business meetings in Malaysian capital city.   I took MH740 flight back to Yangon only on Sunday morning. It was fairly a good flight except when approaching Yangon where heavy clouds littered the southern Myanmar sky and despite the enhanced avionic technology, this Boeing 737 – 800 — the upgraded version of B737 with distinguishable flipped wings feature — still could not withstand the force of the nature, to be exact, the power of Allah SWT.  The plane was relatively new in Malaysian Airlines fleet, just introduced mid this year to replace B737-400.  I must say that it is smoother and less noisier that its older cousin B737-400. Nevertheless the flight was not smooth all the way. Approaching Yangon, a couple of times the ever-cool pilot — who talked in word by word — had to remind passengers to return to their seats and fasten seatbelt, due to air turbulence caused by bad weather. Yangon was raining when I left and when I returned. Monsoon season, so to speak. But I was asleep half of the time of the flight and half asleep at the other  half.  I knew when the meal was served even though with eyes closed, as the aroma was so familiar and so intense. A slight feeling of regret was felt when embarking at the gate as to why I did not ask the stewardess to pack one for my iftaar. Yes it was second day of Ramadhan and I was fasting.

Lets move on with the theme of this post – Ramadhan on Yangon. FYI, this is my first Ramadhan in Yangon and Myanmar after being posted here.

I managed to find time one afternoon in between work to perform solat  Zuhur at Masjid Kokhine Masjid at Kabaye Pagoda Road.  I had to meet Brother Anwar to pay up my iftaari sponsorship I promised him before I left for KUL a week before. He was sharing some story about ifttaar program they are organizing every day in Ramadhan. They needed sponsors for this program — you may sponsor one session for about 35000 kyats. He is the bilal and the trustee for the Masjid.

One night I hailed a taxi to go to the same masjid for solat Taraweh.  It was old white Toyota SE with no inside door cover at the front passenger side. It was just like a mechanic’s car. I could see the gear and other things which control the sliding of the glass window up or down.  When its engine accelerated, it sounded like the helicopter I took the other day to the offshore. But the  driver was really friendly, he was in the talking mood and was asking about where I came from, despite his mouth was full with sirih (beattle leave).

“You Malayu? You Malayu?”. He asked me inquisitively.

I answered in affirmative. And then suddenly we had so many thing in common.  Apparently he was working somewehere in Kajang for four years and returned to Myanmar in 1997. He said one thing he missed badly about Malaysia was bah-kut-teh soup. He said he could not find it here in Yangon such a delicacy. I felt like throwing up. Cultural diffences, I convinced myself.

He charged me 1500 kyats for a 5 minutes ride, and for some information about himself.

Solat Isyak started at 8pm sharp. Solat Taraweh started right after long solat sunat ba’diyah Isyak.  Moslems here are Hanafi followers and they are very particular about solat in jamaah and solat sunat (or nawafil). Our brothers here perform long solat sunat especially after Zuhur, Maghrib and Isyak. While we Malaysians are generally contented with 2 rakaat or none at all, they could go up to 8 rakaat easily. Times for solat fardhu in jamaah are calculated exactly to the minute and displayed at the notice board so that everybody can participate. When the time comes, it starts on the dot.  If you come five minutes late, you will miss it. This is a practise for all masjids in Yangon. To me it is a good practise which can be copied by  Malaysians, who in majority did not bother to solat in masjid, even though his house is next to a masjid’s loudspeaker.

Solat Taraweh was done in 2 by 2 rakaat. The imaam was a young hafeez from a local madrasah. He led the first 4 rakaat before another imaam (another young hafeez) took over and continued with another 4 rakaat.  So all together there were five hafeez leading the solat taraweh. They read surahs after Fatihah very fast, compromising the rules of recitation of verses of the Holy Quran (tawjid). Could not blame them either, since they had to complete the whole Quran within Ramadhan. This happened in Malaysia also and anywhere else where hafeez leading prayers.

The 4 saffs of worshippers remained the same until the end of 20 rakaat. Which meant everybody completes the 20 rakaat. In total contrast in Malaysia where after 8 rakaats, three quarters of jemaah would have left. I have no comment on this.

The regular imaam led solat Witir of 3 rakaat with one salam. It was very similar to maghrib, i.e. with 2 tahiyyats, except in the 3rd rakaat, after a surah was read after alFatihah, there was a long pause before rukuk. I suspected this could be due to Qunut. It caught me by surprise as I  almost went into rukuk by myself after the surah.

There was no selawat in between the 2 rakaats. No tazkirah. The whole 20 rakaats was completed within about an hour. Except for the speed, it was a memorable experience for me.

At 9:30pm, in front of the masjid, Kabaye Pagoda Rd was still busy with traffic. I took another dilapidated white taxi home. 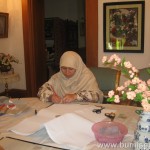 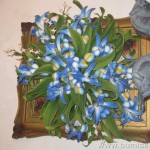 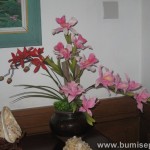 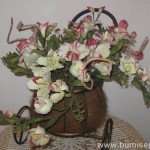 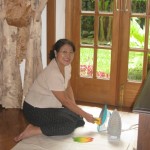 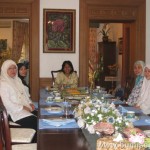 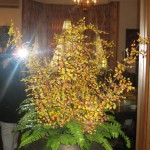