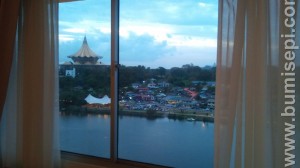 Kuching in Sarawak, Malaysia is one of many cities I want to visit again and again. It is made famous because of the river. Sungai Sarawak divides Kuching City into two areas — Kuching Utara (northern) and Kuching Selatan (southern). During one business trip to Kuching, Sarawak in June 2012,  I stayed at Grand Margherita hotel, located next to Sungai Sarawak. From level 9th you could see slow activities in the river and across the river. Seen at the background across the river are the Astana (the Governor’s residence) and DUN (State Assembly Hall). The river was so clean and boatmen were busy rowing from one end to the other end. The fare is RM0.50 per passenger, one way. After 10pm, the fare doubles. The boats are equipped with motorized engine in case the current are strong. There are many open air foodcourts at the other side of the river.