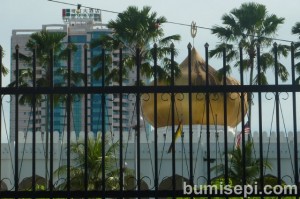 It has been quite sometime I have not traveled on AirAsia flight. For 2 reasons. Firstly I could not collect frequent flyer points as what I did with Malaysia Airlines. Secondly there has not been much fare difference between AK flight and MH flight, therefore I can afford 5-star air ticket offered by national carrier. This flight I took from LCCT to Miri was on time and turbulent-free and I spent 2 hours 10 minutes on Seat 21E with eyes closed. I guess most passengers were too tired. Nobody responded to air stewardesses in red moving along aisle selling foods and souvenirs. I only opened my eyes when the plane touched down in Miri at 9:50pm. It has been raining early mornings and late afternoons since I returned to this city over the Malaysia Day long weekend. 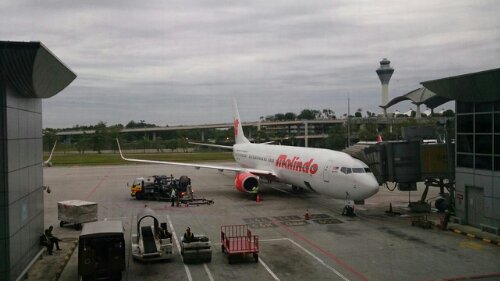 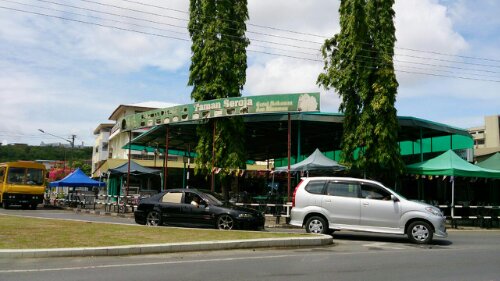 This is Taman Seroja foodcourt. Located within walking distant to city center attractions such as Hotel Mega, Hotel Imperial, Miri handicraft center, Bintang Megamall, waterfront, it is an open-air eateries with stalls selling local foods from fried rice, nasi lalapan, nasi campur, noodles, grilled fish, and even soup and soto.  Price are reasonable. Which stall is good? You have to try it for yourself. Soup seems ok, the right-most stall. Sup tulang, as the name implies, is literally sup tulang. Soto comes with rice cubes. A bit overpriced. My friend Julayhi said fried rice at next stall is good. Never tried before.
If you are into nasi lalapan, do not come here. Instead go to its founder. Muara Restaurant at Jln North Yu Seng.