Last Friday, I received an invitation to a wedding reception. The card was all written in Burmese including a small map with a direction to a a bride’s house — a village in North Dagon, some 45 minutes drive from Yangon.  The groom is my staff, indirect staff indeed. I could not afford not to attend. I found an English version of the invitation card and the map specially prepared for me and put nicely on my table in the office so that I would not miss.  Therefore I could not afford not to attend. 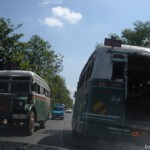 On the road to North Dagon township in Yangon 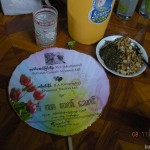 Bride and groom names and their credentials pompously printed 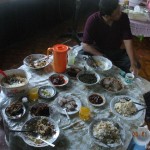 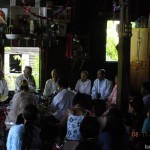 Paying homage to parents and elders before tying the knot

My driver had a hard time to find the place. From north-bound Kabaye Pagoda Road , we turned right to Parami Road, passed the overland bridge and then another bridge crossing the river to the North Dagon. At some junction later, we turned left onto a long, narrow but busy road, not properly tarred. We came to many junctions but we just went straight until we arrived at a place resembling a bus terminal, where all dilapidated green Chevrolet buses converged. This must be their final stop before returning back to Parami bus station. The buses were so old and unsafe that they were not allowed into Yangon city limit. One thing  good about Burmese is that they are self-reliant and highly creative. Nothing is wasted in this country. Despite no spare parts, most things are repaired again and again, modified again and again and reused again and again. Going by Phillip Crosby’s definition of quality which is “fit for purpose”, Burmese fit this definition very aptly. We left the bus terminal and went straight ahead. Then we turned left onto a dirt road, and finally we reached our destination. It was a two storey wooden village house. A small tent was built right in front of the house and decorated rightly for the function. I could see piles of nicely wrapped gifts on one of the table there. You could tell this is a fiesta from the way ladies and children dressed up and men moved about and the aroma of food. I put my gift there as well, and one of the ladies there shouted to the people inside the house, as if some VIP had just arrived. I felt honored.

The groom – dressed up in traditional Myanmar way in  loungyi and white Taipon jacket — rushed out to meet and greet me, and whisked me inside the house, and up to the first floor through a narrow wooden stairs. Up there, a group of elderly men and women were seated, seemed to engage in a kind of ritual, with Buddhism symbols at the background. I was seated at the corner and the groom excused himself to join the ceremony. He moved next to the bride and together they were paying homage to the elders, who later I came to know their parents. One of the elders recited something from his memory to bless the newly married couple. Friends and relatives were happy.

In the meantime, at my table, food was served — buttered rice  (similar to biryani) with chicken and beef curry and vegetables.  I was not sure  whether they are halal or not and I thought it was not proper to ask in front of curious onlookers. It could be culturally offensive. So I did not partake the food save some drink and beans with sesame seeds.

When the ceremony was done, a woman threw candies and lucky money (nicely folded notes) to the crowd and everybody was rushing to collect the goodies on the floor. One of the lucky money fell near me and I unfolded it to find it was a 1000 kyats note. The bride and groom were then ushered to their room, but to get to their room was not easy. Ladies and children and men alike lined up facing each other holding their hands in a long queue, forming an obstacle, trying to stop the bride and groom from entering their room. To break the chain, they must pay some money to each pair forming the hurdle. They slowly made their way to their room after payments were made, and the biggest hurdle was at the entrance to the room, as it was guarded by the elderly women. More money was required here.

The moment was a lot of fun and highly electrifying. I had attended a modern wedding reception at a plush hotel in Yangon early this year, but this traditional wedding reception was something out of this world.

To Burmese, wedding is a time to announce or re-assert the social status and power of the bride or groom and event their paremts. The current job title. The company he or she is working for. The academic qualification whether first degree, masters degree or PhD, and the discipline.  All these are manifested on the invitation card, the backdrop at the wedding hall and other memorabilia given away to guests.