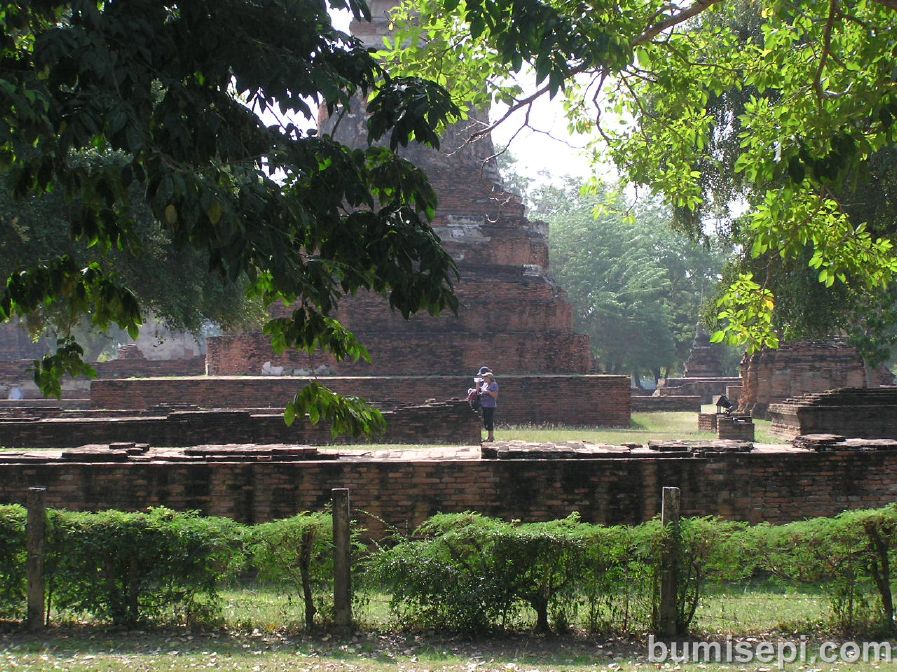 One of the ancient ruins in Ayutthaya

Heading south from Chiangmai and Chiangrai and Maesai, we made a quick stop at this ancient city. Ayutthaya was a capital of  Siam, founded some 600 years ago. The Burmese army seized and destroyed the city in 1767 and what was left behind ever since were the ruins, which can be seen today.  Declared as one of the world heritage sites by UNESCO, efforts are under way to reconstruct the city’s past glory. If you are into history and old wats and palaces or something like that, look no more. Spend some times circling the city either by horse cart or on foot. Tourists are aplenty here.

Ayutthaya is very near to/from Bangkok, less than one hour drive.

Thailand by Bus (Part 5) – Ayutthaya and back to Sungai Kolok.

This is the last part of Thailand by Bus trip. After Ayutthaya, we headed south to Bangkok and spent a night at Hotel Chaleena in the Ramkamheang area. That night we shopped and dined in Pratunam shopping district. The next morning, we visited Grand Palace in Bangkok and a shopping center nearby. [Refer to Part 2 posting on this Bangkok story]. After sumptous lunch of white tomyam soup and solat Zuhur/Asr at Masjid Darul Aman at Phetchaburi, we undertook the last stretch of the journey from Bangkok to Sungai Kolok. Again we missed the coastline of Chumphon and Surat Thani provinces, due to night time. We stopped at Hatyai the next morning for late breakfast – nasi kerabu Kelantan style. Continued to the south, we stopped for lunch at Pattani and proceeded immediately to Narathiwat to beat border crossing closing time into Malaysia at 6pm. [Refer to Part 1 posting on this story].

Finally we reached Sungai Kolok at about 5pm with the same double decker bus fully loaded with counterfeit items and souvenirs from Thailand (read: China). Border crossing into Rantau Panjang, Malaysia,  was a breeze — surprisingly — thanks to Matlee, due to his fierce connection with border people. It was one of the trip I could not forget.  Thailand is always in my mind for years to come.  To Cikgu Anuar, wherever you are. if you have other interesting projects, let me know. We share the same interest in the story of the roads.   Terima kasih untuk semua. Wassalam.

From Chumphon,  our next destination is Krabi,  the resort city at the east cost. We drove to Surat Thani via highway 41, and turn right on highway 44 to Krabi. More from my siteProjek C: Masjid Thap Sake di ThailandProjek C: Mencari masjid di ThailandProjek C: Border crossing into ThailandKembara 4×4 di Kemboja 2015Wajah-wajah Kemboja […]