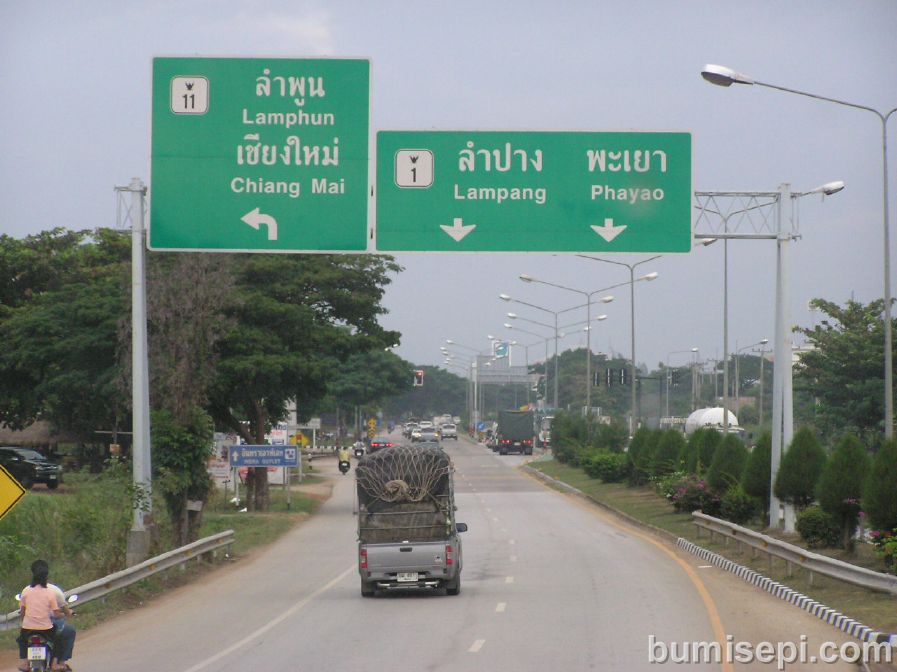 En route Chiangmai, the city of Lampang is a popular stopover for weary travelers.

We left Pattaya early in the morning on the third day. Continued to the north to Chiangmai bypassing Bangkok business district. There were many towns we passed by, as you can see in the photos link below. We finally stopped at Lampang to catch  Zuhur/Asr prayers at Masjid Al Falak. Lampang is the third largest city in Thailand, some 600 kms from the capital city Bangkok, and some 100 kms from Chiangmai. It is famous for its horse-cart (kereta kuda) and colorful buildings made of teak wood (kayu jati). Again, I could not explore the city beyond the authorized bus stops, even though I wanted to. We left this cool city in the drizzling rain and headed for Chiangmai.

Tired and hungry, the first place we stormed in was a chinese restaurant when we reached the city of Chiangmai. The bus driver had a difficulty manouvering the big bus through narrow downtown streets to find the restaurant, but finally he made it to the applause of starving folks in the bus. So welcome to Chiangmai, said the smiling owner. After dinner, we checked in into a riverside hotel and called it a day. Some young ones or young-at-hearts sneaked out to the nearby Night Bazaar, one of the main tourist attraction in Chiangmai.

The next morning, we trekked up the 1700m mountain Doi Suthep, perhaps the most famous tourist destination in Chiangmai. The city was surrounded by the mountains, and of them is Doi Suthep, believed by locals as a spiritual guardian of their city.  Along the winding but good road up the mountain, we passed by a national park, some Buddhist temples and waterfalls amidst lush tropical rainforest.  Not much stories & photos on those places, though. Again, same excuse — I could not stop, this is an organized tour! (Orang gagal beri alasan).

The rest of Chiangmai and environs pixs are here.

From Chumphon,  our next destination is Krabi,  the resort city at the east cost. We drove to Surat Thani via highway 41, and turn right on highway 44 to Krabi. More from my siteProjek C: Masjid Thap Sake di ThailandProjek C: Mencari masjid di ThailandProjek C: Border crossing into ThailandKembara 4×4 di Kemboja 2015Wajah-wajah Kemboja […]