A funeral in Yangon, MYANMAR

My office staff’s grandmother passed away and I was invited to the funeral.  Employee relation and welfare is part of my job scope, so I chose to attend.

This is my second time attending funeral since I was posted to this country called Union of Myanmar.  The deceased was an old lady.  So the ritual is a Buddhist one and it is pretty simple. I have never attended any Buddhist funeral anywhere before, even in Malaysia, so I did not know how Malaysian Buddhists manage their dead but I guess it is the same.  I thought only Hindus burned their dead and keep their ashes, but Buddhists in Yangon also doing the same thing. They cremate  the body instead of burying them. 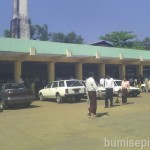 At a lobby of a funeral house 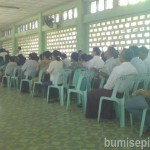 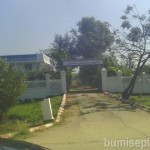 A moslem cemetery in Yuwei, Yangon 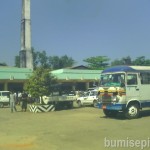 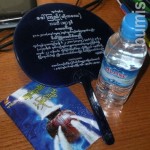 memorabilia from the grave

The funeral was conducted at a cemetery located at Yuwei, about 45 minutes drive to the north of Yangon. It is a huge area to cater for all people of Myanmar from different religions.  The process of managing the dead are typically belief-based, so the burial area is divided but religions, but all is at this single location. There is Moslem cemetery. There is a Christian cemetery. There is a Hindu one and of course Buddhist one (for info, 80% of Burmese are Buddhists). All next to each other, divided by fences.

My driver dropped me at the lobby of the Buddhist funeral house. At the entrance of the prayers hall, a man in loungyi handed me a see-through plastic bag containing a 300ml bottled drinking water, a decorated fan and a small prayer book.  I could make full use of the the first two items as it was very hot afternoon in Yangon at this point in time, but not the small book. I learnt later that the small book is a collection of prayers written in Myanmar by the respectable monk in the country.

The hall is semi-open and is filled with plastic chairs. Seats were almost full and everybody was facing forward toward an open-top coffin. I saw everybody entering the hall will go to the front to pay respect to the body in the coffin, and returned to the back of the hall to find a vacant seat. I did the same. I glanced inside the steel-framed casket. The body was dressed in white gown. I could see clearly the pale face of the old woman. Flower bouquets filled up the long stand at the back and the biggest of them filled up the main table in front of the coffin. The name and the title of the donor was written a big card hanging down at each bouquet. I didn’t see any donation box so I guess cash donation is not welcomed here.  Front rows were seated by the relatives of the deceased and wise men. Soon I was introduced to eldest son of the deceased. In early 50’s he seemed cool trying to control the tears. I offered personal and official condolences to him. Nobody cried and wailed loudly and uncontrollably like Chinese in Malaysia.  No black uniform either. Everything and everybody seemed to be in the acceptance mode that life must go on.

After some times, two men carrying a gong over a wooden bar on their shoulders at both end entered the hall. The one at the back hit the gong repeatedly to signal some thing will start. They went up to the coffin accompanied by many who transfered the body from the coffin to the stretcher with roller. They slowly pushed the body out of the hall followed by the guests who followed from behind. When the body was past the entrance, a man threw the ceramic pot on the floor and it was broken to pieces, to mark the end of life of the deceased.  At the entrance of the crematorium — a building next to the prayer hall — the body made a stop to allow the relatives to bid final farewell and to take a final glance at the deceased.  Then two black men from inside the crematorium came out and push  the body inside. They shut a big door and what happened inside the gas-fired crematorium was unknown to the curious onlookers. The funeral process ended there.

I left soon after that wondering when is my time.I learnt later that a memorial service for the deceased will be conducted by the family a week after funeral. Within this period of one week, the spirit is believed to be floating around the house, and therefore must be taken care like a living person. The family member will put  a big photo of the deceased at one corner of the house, ‘feed’ him during breakfast, lunch and dinner and talk to and pray for him. All the windows must be open 24 hours to make sure the spirit ‘leaves’ the house happily and willingly within that period.

The strange practise you may say, but being posted overseas, I grow to appreciate these cultural differences. World is an awesome place, right? To borrow Discovery Channel tagline.

HOW TO REACH THIS PLACE?

Malaysia Airline flies daily from Kuala Lumpur to Yangon, MYANMAR, except Tuesday and Thursday. It is about 3 hour flight time.  Malaysians need visa to enter  Myanmar which is valid for 10 weeks upon entry.

There some photos related to this experience. Forgive the quality of the photos as they were shot using a simple O2 Atom camera phone.