November 2010:
Brunei, located in the northern Borneo, is one of the last remaining Sultanate government in South East Asia. It is also one of the three governments in the world ruled by monarchies under a dynasty claiming descent from Prophet Mohammad (peace be upon him). Brunei, despite relatively small size comparing to its neighbouring Malaysian states of Sarawak and Sabah, has more to offer to unhurried visitors, in term of natural landscapes — unspoiled forests, rivers and beaches. The capital city is Bandar Seri Begawan (aka BBS).  Population of Brunei with all 4 districts (Belait, Tutong, Bandar Seri Begawan and Temburong) is about than half a million people only. Despite the size, the country enjoys among the highest GDP and purchasing power per capita in the region, and considered the developed country by IMF standards. Read on below for another story of the road, this time Brunei. Pictures quality may not be that good as  I was using camera phone SE Xperia X10 running on Android 1.6.
I was often informed by colleagues that it takes only one day to discover Brunei, but I did not think so, upon my first visit to Brunei. Yes you can travel end to end , i.e. border to border, within 5 hours non-stop, but to appreciate people and places in Brunei, you need more than that. BBS deserves a day or two for discerning travellers. Kampung Ayer is a must to visit. Town centers of Kuala Belait,  Seria or even Tutong are all off main highway, which require a detour and of course time if you want to visit them. Gadong is a suburb of BSB and just about 10 minutes drive to the BSB downtown area.
In summary, the key tourist attractions in BSB include:
1. Kampung Ayer. It reminded me of my trips to Venezia, Italy (2006) and also Inle Lake in Myanmar (2009).   I wrote about Kampung Ayer in Brunei my other posting here.
2. Sultan Omar Ali Saifuddin Mosque
3. Sultan Hasanal Bolkiah Mosque in Gadong suburb.
4. Palaces (Istana Nurul Iman and Istana Darul Hana). Can just see from outside.
5. Royal Regalia Building. It is a museum containing treasures of Brunei Sultan. Free entry.
6. Yayasan shooping center, near Kampung Ayer jetty.
7. Modern shopping centers (The Mall & Jaya supermarket) in upscale Gadong area. Many expensive hotels nearby. Also fast food outlets like McDonalds and local competitor Jollibee restaurant, can be found there.
8. Jerudong Park. It is an amusement park. Good for kids and adults only.
9. Tamu Kianggeh. It is an open market selling perishable foodstuff, fish and vegies and others. (Unfortunately we reached there in the afternoon and already closed).
10. A mosque near royal cemetery (sorry, don’t know the name of the mosque, but it is rather big)
11. RBA Golf Club. It is near the airport (if you are golfers, of course)
See some photos on BBS below, as captured by amateur photographer (as for now): 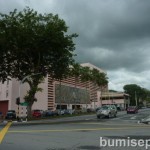 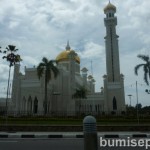 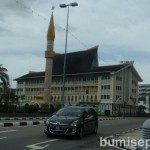 A historical building in Brunei 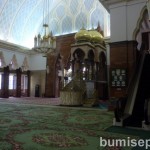 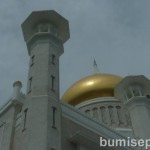 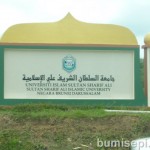 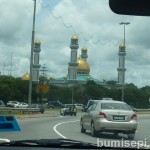 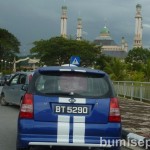 A mosque near Royal cemetery 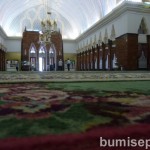 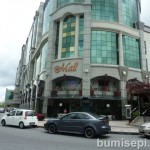 The Mall near Gadong business district in Brunei 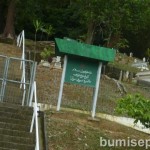 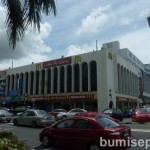 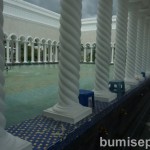 How to get there:
Royal Brunei Airlines flies to major cities in Asia Pacific and Middle East and other places. Catch one of their return flight to Brunei from your nearest airport. So easy ha! From Kuala Lumpur, Malaysia Airlines fly directly daily to BSB. If you are already in Miri, Sarawak, just like yours truly, just catch the express bus Miri-Brunei. You need a valid passport of course, and if you are not Malaysians, you may need a valid visa. Check with your embassy, before getting on the bus or the aircraft. Read my other posting here for crossing land border Malaysia-Brunei from Miri side.

Kampung Ayer (“a village on water”) in Brunei