Dalat is a town near Mukah in Sarawak. It was not easily accessible from Miri, where I work. From Miri, you get to pass Bintulu and along the road to Sibu, at a junction called Selangau, you turn right to Mukah. Drive another 80 kms or so to reach Mukah town, and from Mukah town it is about 40 mins drive to Dalat. All in all, it is some 400 kms from Miri, I would say. The road stretch between Tatau and Selangau is no PLUS highway either. If you see a driver in front of you driving zigzag, do not worry. It is not that he is drunk, but he is avoiding potholes.

I visited this town one day after I reached Mukah (see my other posting on Mukah) in December 2012.  It is the same day I visited Oya, another unsung places in Sarawak, both near Mukah. The names of these places were reasons why I came here. No relatives. No wedding invitation. No other interests.  Only armed with a compact digital camera, soon to be upgraded, insyaallah. In fact I planned to travel further up including towns like Igan, Mato and Daro, but time was not really on my side. May be later, God willing.

Lets get back to Dalat. To begin with, Dalat is one of the district in Mukah Division in a state of Sarawak. The majority population are  Melanau (60%) and Iban (30%) and the rest. Dalat town is self-contained. It has everything people need — secondary school, primary schools, a post office, a hospital, a stadium (Stadium Perpaduan Dalat), an old Chinese temple by the river and two mosques — one on the other side of the river.

How to get to Dalat?

Dalat is about 40 minutes drive from Mukah. The road is good and you could see sago trees and fruit orchards along the road. Locals also travel by speedboat to Sibu and Mukah. Nearest airport is Mukah. More reliable airports are either Bintulu or Sibu. From either, you could fly to Kuala Lumpur.

What to do here?

I am not sure myself. Certainly it is not a tourist area. But if you like to see and feel how Melanau people live, come to Dalat.  If you want to see a small girl navigating boat along the Oya river, come here.  If you are local to Dalat and reading this post, pls share must-visit sites in Dalat.

Enjoy  the photos though. Life by the river - a masjid at the other side. 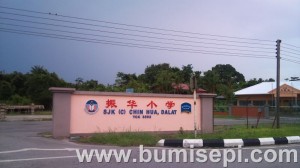 A Chinese temple in Dalat, Sarawak A jetty at the Dalat waterfront