This project was co-organized by AMAL 4X4 Club, before Ramadan 2014.  AMAL 4X4 is an NGO, active in reaching out to orang asli (natives people) and other hard-to-reach community doing charity work and dakwah (spreading message of Islam).  Other objectives are recreation and rescue. Visit AMAL 4X4  facebook for details what we are doing.

Pos Kuala Mu is about 50 kms from Sungai Siput town. (Sungai Siput town is about 27 kms north of Ipoh, capital of Perak). Pos Kuala Mu is a remote orang asli settlement.  En route we passed by several orang asli villages. Pos Kuala Mu is at the end of the stretch. About 160 families including neighboring villages, half of them are Muslims, the rest are either Christian or animistic. Their livelihood is hunting and gathering forest products. Some youngsters left to work in towns and cities. Lately the Government have started initiatives to bring them to the mainstream society and introduced modern elements into their life. A new secondary school with wifi connectivity. Brick houses. Solar panel at every home to generate electricity for home use. Mobile cellular connectivity, where the telecom broadcast station is powered by diesel genset. Except decent road to connect the community to town.  The only access road now is jalan tanah merah (untarred mountain  road), rendered useless when it rains. In short you need a 4X4 vehicle to get in and out of Pos Kuala Mu. A standard 4X4 is good enough.

We set out from KL just before midnight, driving along PLUS highway. Exited at Kuala Kangsar toll plaza and took trunk road to Sungai Siput. KK was a town of light even at 3am, Reached Masjid Felda Lasah one hour before Fajr time. This masjid is our port before we started the offroad adventure  the next morning.   Few other 4X4 from Taiping and other places joined us from the masjid. Felda Lasah is a village, very quiet one, with bare necessities. A no-name petrol station, a small grocery store, couple of road-side food stalls, a primary school and of course a mosque and a graveyard next to the mosque. That is all I could notice around Felda Lasah. May be more — well I don’t know.

The weather was fine and sunny when we set out in the morning after having breakfast at nasi lemak stall in front of the masjid.  Parents were busy ferrying their children to the school nearby in the motorcycles. Some were curious to see so many 4X4 vehicles parked in the masjid compund.

We met many new friends from among suku Temiar. Probably the most forgotten tribe. Their names are very traditional unless those converted to Islam. They changed to muslim names like Rafik and Alang, the most elderly of the clan, along with Tok Batin I could not remember his name. The children were happy sokmo and camera-friendly with their innocent faces. We brought elementary children books from KL (sponsored by a brother) and read with them.

On the way out, we stopped by at Sungai Perlus waterfall. Fishing time. But no fish though.  We took out portable gas stove to boil water for coffee. And for some, snack time with instant noodle. The ambience of tresh air and the rapid and the waterfall. What a place to enjoy a cup of coffee.

We bumped into a Pakistani carpet man on motorcycle fully loaded, on the way out. Also a Chinese trader from outside (Sungai Siput)  driving in Mitsubishi Triton  into this community to sell basic foodstuff, and probably in exchange with forest produces such as tongkat ali and others.  A group of dirt bikes riders were having fun riding along the dirt road. It was raining heavily with gusting wind when we reached Kampung Bawong, at the end of the jungle road. Obviously the storm had brought down trees onto power lines. We took time to stop to clear the road.

The subsequent trip to Pos Kuala Mu is scheduled in November, to start construction of the Surau or just musolla. Just after Hari Raya Idil Fitri, Alang called to inform that durian sudah luruh. 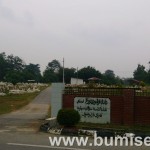 A permanent resting place. Are you ready? 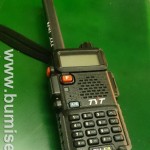 Radio like this is vital when travelling in convoy

Fresh stream flowing along the road 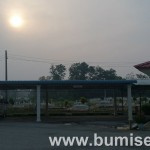 Only the living can enjoy the morning mist and sunshine 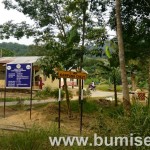 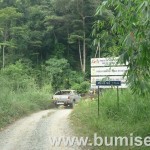 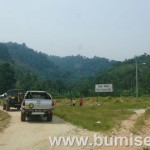 Kuala Mu is located in a valley 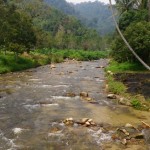 A river cutting across Kuala Mu 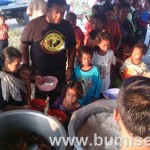 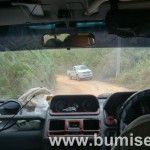 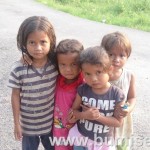 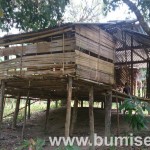 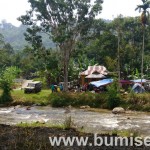 Our camping site at Kuala Mu 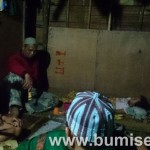 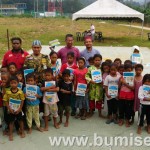 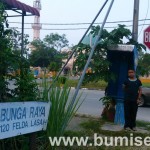 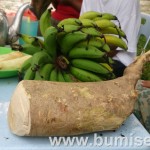 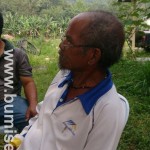 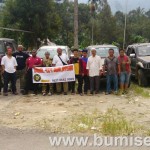 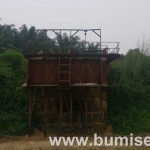 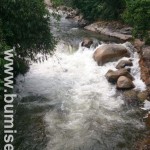 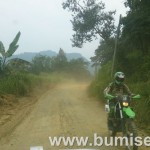 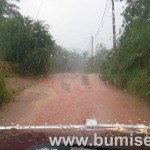 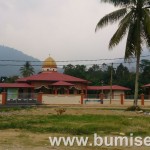 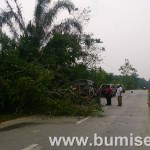